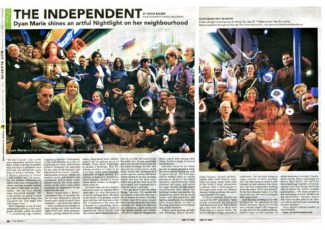 Bloor NIGHTLIGHT
An Nuit Blanche event to take back the night
Sept 29, 2007, 7pm to 7am, Bloor Street
On Bloor Street from Lansdowne to Margueratta

Bloor NIGHTLIGHT, a festival of lights along Bloor Street from Margueretta to Lansdowne unleashes a dynamic series of artworks that work to vitalize this at-risk area for Nuit Blanche. BIG: Bloor Improvement Group, with initiating artist and curator  Dyan Marie, and dozens of contributing artists, offer “BLOOR NIGHTLIGHT“ an event that will involve wide local support and participation. The 2 block-area BLOOR NIGHTLIGHT location between Lansdowne Ave and Margueretta Street is best known for its negative press coverage: 94 crack dealers charged in one month, toxic lands, struggling and vacant storefronts. Bloor Nightlight intends to be a catalyst. It is a Nuit Blanch project to take back the night and engage the neighbourhood.  A related Better Bloor project works from now until September to clean, repair and improve the street and help local business. BLOOR NIGHTLIGHT invites the city to witness the start-up of the vitalization of Bloor.

Joe Fleming Ice House and Film  Imagery shine through the walls of Joe Fleming eco house made entirely with ice.

Performance and stage events with ArtTV.

Cloud of Doubt Objects and lights sources wrapped in place along the street to create lingering clouds by JP King and Stephen Marie-Rhodes.

Bloor Bike Light A bike parade, tricked out in light for the night, curated and bike by Bruce Ward with Mark Greenhough, Herb VandenDool, and others.

Stores and Upper Floor Windows along Bloor Local residents and businesses are invited to inventively light-up their store and apartment widows.

Sticky Lights Small light sculptures, powered by watch batteries and able to be fixed by magnets to any metal surface enable a dispersion of light and art in unexpected places throughout the area. A Community Cave sponsored projects with artist, community groups and schools: Bishop Marrocco/Merton, Bloor Collegiate, Kent Senior School, Ontario College of Art and Design and The Student School

Water Tower Local water tower landmark project by Roman Milo. Roman lights up the tower, viewable across the TTC lands and has an accompanying film at the Lancaster.

Thank you to  participating artists, sponsors and volunteers. Thank you to the City of Toronto for sending a special bus to Bloordale, to Mayor David Miller for announcing Bloor Nightlight as “not to be missed” to Eye Magazine’s David Balzer for the kind feature  story, to Spiro for letting us use The House – all working to help make the night shift.

Food +++++ music and events to participate in.