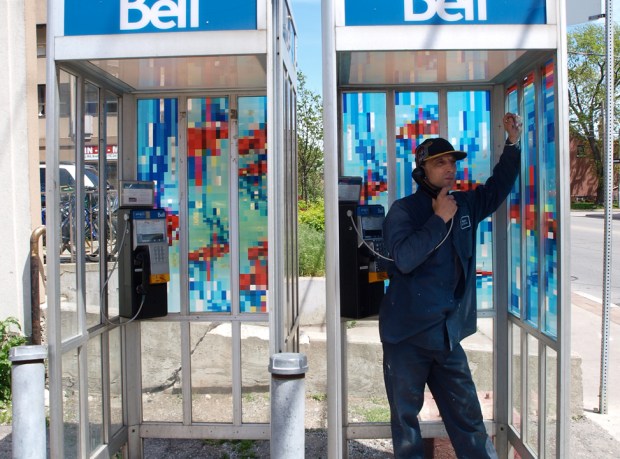 Telephone booths are disappearing, those that do remain are used most often by people with bad luck or having a bad time. This work is a makeover of a Coffee Time parking-lot telephone booth that is transformed into a sanctuary. The windows are skinned with stain-glass colour. At night they provide a street-corner fire-place glow. From time-to-time change is offered in the booth with a note to TELL ME – call the number for the message that is part confessional and part interrogation.

Related:
Poetry At The Coffee Time Poetry:  Dyan Marie reading at the Coffee Time, Bloor and Dupont to identify a high needs blind spot – The Coffee Time is located in an industrial area evolving into mixed use with a uranium plant, high needs housing, PCBs and rapid condoization competing in the same block.

Tell Me Nuit Blanche 2014: Tell Me, project in the telephone booth, call the number posted for a message.

It’s Not Broken If You Change The Colour

Dyan Marie’s Tel Talk project is located at the corner of Dupont Street and Lansdowne Avenue. The rapidly changing intersection is the site of industrial rise, fall, decay and recent aggressive re-development. The nominal centre at prime street level of this whirlwind of urban evolution and is a long-established Coffee Time drive-in restaurant. Coffee Time is flanked on both sides by 2 bay-sets of outdoor public telephones. Dyan’s installation in the phone booth, in various shades of colour, comments on dysfunction, comfort, miscommunication and try-hard effort. 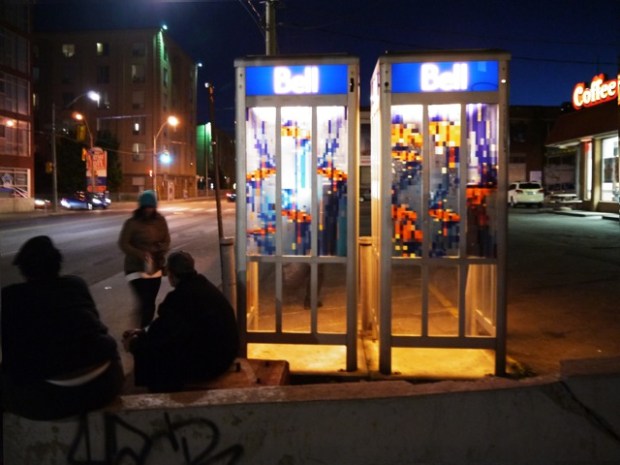 South-west corner Dupont and Lansdowne The Standard apartment complex was an American Standard toilet factory until the late 1990s.  It sat derelict for several years until it was renovated into the current large-scale rental unit.

South-east corner Dupont and Lansdowne Formerly a parkette fashioned from a previous TTC turnaround loop, the site has been a seven-story condo building developed in the early 2000s.

North-east corner Dupont and Lansdowne Just north of the telephone booths, 1011 Lansdowne is an infamous rental high-rise known as one of Toronto’s 10 worst buildings in press stories that have reported its various transgressions and tragedies. In recent months efforts are underway to stucco the buildings exterior. There is a plan to locate social service within in the building to advocate for residents and help services. 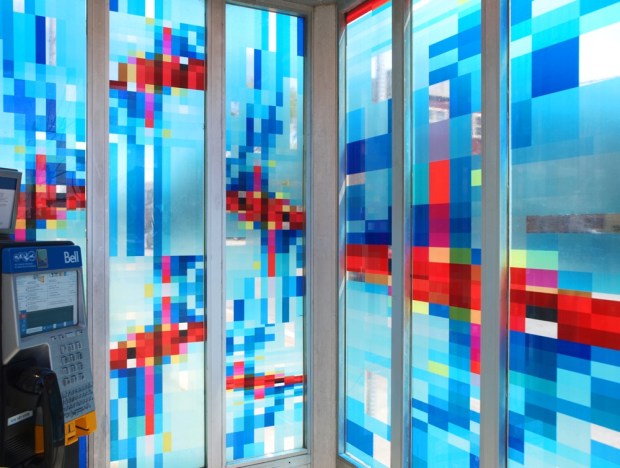 Change The Colour
When you want to speak to the invisible
this telephone booth will do
but it helps to change the colour
at the pay phone,
down at heel, high on something
a man talks to a woman.
connection at a click – disconnection at another
she hears red
the colour of his skin
the rash between his fingers
an occupational hazard
of washing with chemicals
in a night-time-day-job
red
rush of confusion
when he says her name
the telephone booth transforms
when he imagines her as colour
yellow
the colour of voice
on a visible journey coming from
the other end of the line
holding the receiver
she waits out pauses
listens to his breathing
the listening saves him
and he keeps trying
to say what needs to be said
with words he doesn’t have
distracted, distressed by what’s on the ground,
street traffic and living this way
colour arrives
and stain the windows
just-in-time to fill the empty space.

Colour, for the people who use the telephone booth located beside the Coffee Time at the corner of Dupont and Lansdowne — people who can’t afford a landline, let alone a cell phone. Thank you to Bell for agreeing to let this booth be art in public space and a sheltered place to talk, make a connection, do business, made notable by changing the light.

Dyan Marie chose a booth at Dupont Street and Landsdowne Avenue—one that she says is still used often.

“… people calling people for their various reasons. And often it seems fairly dramatic.”

Inspired by churches, and the idea of quiet spaces for thought and conversation, she put up translucent, coloured panels, not unlike stained glass windows.

Her palette came from photographs she took of the area, and especially of a man who frequents the neighbourhood of the telephone booth.

“In this one, I’m glorifying the fact that those services are still available to people who actually need them, in an area that is well used,” she says.”