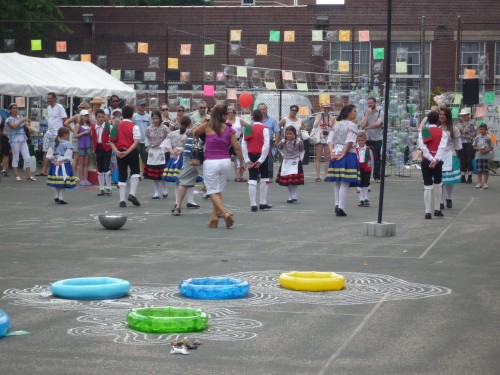 Responding Festival, a month-long project of architecture, art, poetry, playgrounds and dance held during the summer in the Bloordale district of Toronto, culminating at the BIG on Bloor Festival.

Located at the intersection of Bloor and Dufferin at the soon to be closed Kent School tennis courts. Responding was planned as an event to claim the area as an on-going public space in an up-coming redevelopment discussions.

The Responding Festival was a month long project by artists, designers, architects, poets, community groups, residents and volunteers and is a feature event of the BIG On Bloor Festival July 21/22, 2011.

The School playground directly edges Bloor Street but is separated by a 12 foot high chain-link barrier fence. Last summer we opened the playground area of the school and offered it as a Bloor Street public space. We will transform the empty space into a public art environment, a collision of art and architecture, performance, poetry, landscape, discussions and playgrounds made by artists and architects, cultural collectives and community participants. The intention is to make a non-stop swirl of activity, a site for evolving experimental forms and new ways of creating in a shared place that responds to the city, the community, each other and being here now.

Responding actively marks the schoolground site for designation as an on-going public space when Kent School closes in June, 2012. The project is an effort to claim the corner of Bloor and Dufferin and safeguard for community use in forth-coming development proposals.

Responding to neighbours yelling at each other,
themselves and people that don’t exist
Responding to living in a fever and in art and in the smoke of cigarettes
Responding to — not another “hard day’s night”.
Responding to the intersections of
Building materials, each other and Bloordale

An architectural project led by Ryerson University Masters of Architecture Program, conceptualized the site as The Flower Box. They fastened 3000 different transparent coloured tiles to the surrounding 12 foot fence. This colourful transformation made the site highly noticeable to pedestrians and car traffic, and at night the glowing light box became a signature gateway into Bloordale. Three specially constructed entrances invited the community to enter.

Weekly workshops were offered by individuals and collectives. Richard Mongiat held gatherings to collect ideas for the creation of a Bloordale flag, Mujeres Creativas came to make Piñatas, Shannon Partridge offered an extended basketball hoop and lessons in 3D, both using white pipe cleaners. A wide-range of materials were supplied daily for the playground, which were used a daycare, an art enrichment class, high-school summer school students and others that dropped in .

The artist team of Stephanie Ashenfelder and Amos Scully cast 500 drawing chalks in the shape of Kent school and offered large-scale drawing programs. Dougal Bichan made an intentional fall-down structure and regularly dropped by to erect it again and to play the bag pipes.

Orest Tataryn constructed a flashing light beacon out of neon tubing in a playground corner and Stephen Marie-Rhodes created a large-scale light sculpture made of recycled flower boxes, milk crates and flashing LED lights. These were stacked in different configurations every day. Mike Hanson’s 200 painted, floating umbrellas that formed a protective awning. Marianne Lovink’s standing sculpture utilized recycled bottles but appeared like hand blown glass models of a futuristic landscape. Near the back fence, Ulysses Castellanos’ installed a work made with blood-red felt and damaged stuffed toys.

A pole became a ‘look-out’ for a rat, while a web with flashing blue LED lights flickered in the festival tent. 100 used flower vases shaped like a sleeping body became a site to place notes about rest and several wading pool offered participants floating letters to ‘write on water’ by Dyan Marie. Architect Arthur Wrigglesworth created two large forms; underlying substructures of wooden ‘bones’ covered with tarpaper, to be used as drawing surfaces. Pamila Matharu installed 100 portraits in a project that involved her students while 5 cultural folk groups entertained onlookers with traditional costumed dancing. Iain BAXTER& floated his signature & in helium bubbles.

As a starting point the project engaged the 12-foot high chain-link barrier fence that forms the perimeter of Kent Public School playground, which forms the southwest corner of the Bloor/Dufferin intersection. Over the month, Responding opened the playground as a new public space on Bloor Street. The empty playground was transformed into a participatory public environment featuring a collision of art, architecture, performance, poetry, landscape, dance and discussion taking place in an evolving playground created by artists, architects, cultural collectives and community participants. The swirl of on-site activity was an experiment in developing new ways to respond to the city, Bloordale and each other within a shared, creative space. Responding helped mark the school ground site for designation as a continuing public space when Kent Public School closes in 2012.

Thank you to everyone that participated. Responding was made possible with the support of the Toronto Arts Council, the Canada Council, Wallace Emerson Community Centre, Enbridge Gas, Neudorfer Corporation and Flogos Canada, thank you. Appreciation to: BIG and Bloordale BIA directors and the BIG on Bloor festival co-coordinators, Dougal Bichan, Sid Bruyn and Johnson Ngo for your generous help.