Closing the space was made possible by working with the city councillor, neighbours and undercover police. The closing generated lively discussion regarding prostitution – for and against – and safety for sex workers.  In response, the project Standing On The Corner, was initiated as a way to better understand concerns, experience and issues of safety for sex workers.

The closed space was reopened as The Massage Gallery

The University of Toronto Faculty of Architecture, Landscape and Design and the Department of Geography was invited to create urban planning and architectural ideas for the  Dupont West and Lansdowne neighbourhood.  They created,  Blind Spot: urban design ideas based in the Dupont/Bloor West neighbourhood. 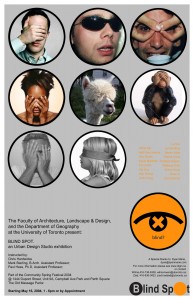 The exhibition included concept plans for the adjacent railway intersection and presented drawings exploring an overpass, trench and tunnel.

The opening of Bind Spot was timed to be a feature of the  2004  Dupont West Festival with JTAC and others. Festival events were located at:  1444 Dupont, Dupont Projects and the Massage Gallery) and Perth Park and Campbell  Park.