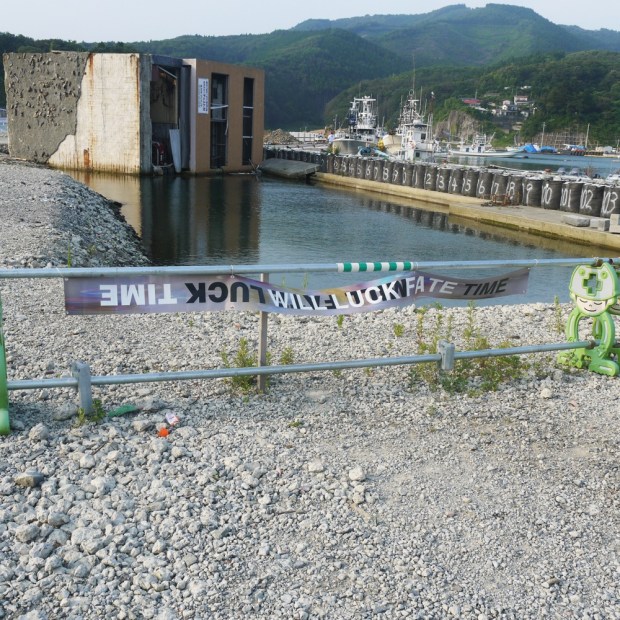 Still surfaces doubling symmetrical reflections of calm
Clouds over water, hands touch, giving what you take
Growth patterns, the seasons, the minutes of the hour
Passions in pure colour and important points of happiness
Routines, expectations, assumptions: tomorrows
The everyday.
Unseen, unexpected, unprepared
Turbulence developed in an undercurrent
The earth shifted, water covered land, cities washed away
Listened for a wilding wind but it lay hushed, composed, conspiring
A thousand years of secret plans
Put in motion in a moment.
A single body gone and missing
Too vast, too impossible, too important
To chronicle and list the loss
The landscape strange, unrecognizable
The look-out, a shared summit of debris
But I am still alive and you are still alive.
And you are still alive and I am still alive.
– March 11, 2011
Field Trip Japan Backpack 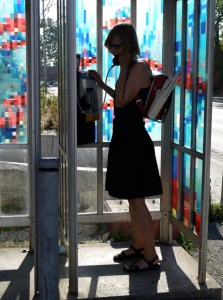 Image: In conversation with Daisuke Takeya,  wearing the back pack containing Japan Field Trip project – You Are Alive, I Am Still Alive

Field Trip Project is a mobile/ participatory/ interactive art exhibition installed within Japanese elementary school backpacks. Traveling to various locations, it connects people and bridges communities. Remote from the white cubes of art galleries and museums, literally everywhere is its venue; from an empty field in the disaster-affected areas to shopping streets and residential neighbourhoods. Every interaction with the project becomes a memory towards the future.

At the end of the school year in March 2012, a number of unused relief supplies gathered in gymnasium of Onagawa Daiichi Junior High School were scheduled to be either shipped to developing countries or treated as waste. Toronto based visual artist Daisuke Takeya with Chie Kajiwara, an Onagawa based art teacher, suggested an alternative use for the Japanese elementary school backpacks among the surplus. A large number of these backpacks were entrusted to them, and a set of thirty-five were sent to Canada to be transformed by passionate Canadian contemporary artists into a mobile art exhibition. They were then sent back to Onagawa again and re-used to empower people through communication with art.

The project will travel to a variety of cities and inspire ideas towards the recovery. It also focuses on community issues at each destination, and will investigate what makes vibrant and sustainable communities.

A number of artist were selected to travel to Japan and work directly on site with institution, city and community members.